Some of the most underappreciated drumming came out of the disco-era. As a precursor to modern day electronic dance music disco made funk music approachable by the masses. Four-on-the-floor is a rhythm pattern used primarily in disco music. It is a steady, uniformly accented beat in 4/4 time in which the bass drum is hit on every beat (1, 2, 3, 4) in common time. I love locking in to a beat in four-on-the-floor and riding it throughout an entire song.

To make this beat sound clean and powerful you have to make sure there’s no flaming. Flaming is where one strike falls just before or after another. You want the beats to line up perfectly for a nice, fat sound. Practice this with a metronome first. Start really slow so you can train your muscles and your ears. You can do this at speeds as slow as 45 beats per minute (bpm). As you progress, increase your speed by five bpm at a time. When you work your way up to 120 bpm, you’re ready to play this drum pattern with music.

What I like about four-on-the-floor is that you can let the other instruments shine and create the groove. Syncopate heavily with other instruments, especially the bass. The easiest way to create some interest in a four-to-the-floor beat is to get rid of the kick every once in a while. For instance, try removing the first kick every 9th bar of your drop. Here’s a perfect example of four-on-the-floor in a classic disco song: 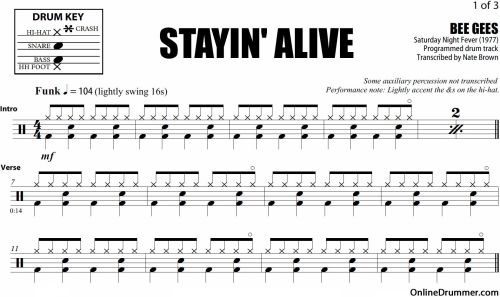