Just before he died, Keith Moon had signed a contract to play a different set of British drums and move away from Premier. Staccato drums are made from fiberglass and are horn-loaded with a sort of trumpet end coming from their bottoms and at right angles to their heads; rather like the North drums built during the ‘70s in America. Unfortunately, the Staccato deal was suddenly nullified by the news of Moon’s tragic death. Today Staccato drums are still being manufactured. According to their website the drums work on something called the “kadency” principle, in which “a volume of air projected through a controlled expanding space will have a great effect on tonal resonance, distribution and power.” In drummers’ terms, clarity with loads of volume. The drums are custom made to order and are constructed in either glass fiber or carbon fiber.

Mitch Mitchell (Jimi Hendrix Experience) was the first drummer to ever play Staccatos live at the Golden Lion in Fulham, London in 1977. Simon Phillips (world-renowned session drummer) did a lot of studio work with his Staccato kit. John Bonham (Led Zeppelin) played them at Paul McCartney’s super sessions at Abbey Road Studios in the late 1970’s. Nicko McBrain (Iron Maiden) played them with the French band Trust and did a great deal of testing in the recording studio. Bands that recorded music in the 1970’s and 80’s using Staccato drums include: Uriah Heep, Gary Numan, Bow Wow Wow, Yazz, Roxy Music, The Guess Who, Eurythmics, Malcolm McLaren Band and Spliff. Perhaps most interesting is that they appeared in the film “Harry Potter and the Goblet of Fire.”

For more information, visit the official Staccato website at https://www.staccatodrums.com/

There is even a German Staccato fan site that pays homage to the drums from around the world.

I got some good feedback on this one so I’m running it again but this time with the complete PDF. “Pea Soup” is a term used by some drummers to describe the sound that results from playing the hi-hat with lots of attitude in order to add “flavor” to the beat.

The playing style affectionately described as “pea soup” can be achieved in a variety of ways. Some drummers get this result by playing an open hi-hat sound, followed by a quick closed hi-hat sound. They may also strike the hi-hat cymbal with lots of attitude and focus on accenting the open sound to make the hi-hat “bark.” This can create different “colors” which means that a drummer can get a variety of different sounds out of the same drum or cymbal by simply striking it differently. You can use the pea soup approach to create two different colors by playing the open sound with the shank (or side) of the drumstick and the closed sound with the tip (or end) of the drumstick. You could also play the open sound on the edge of the hi-hat or strike the cymbal closer to the bell (or middle) of the hi-hat to achieve different sounds. While the concept of pea soup is simple, the level of difficulty can increase depending on how much flavor you want to add your beats. The most important thing to remember is not to over do it. A drummer must always maintain good time and meter. Too much extra flavor can interfere with the beat. Just like cooking a favorite recipe, you must use the right amount of ingredients. Practice with a metronome and find the right balance.

Below is an example of Pea Soup. Here is a PDF with a breakdown of each bar using our FUNdamentals notation. (Click image for full-size.) 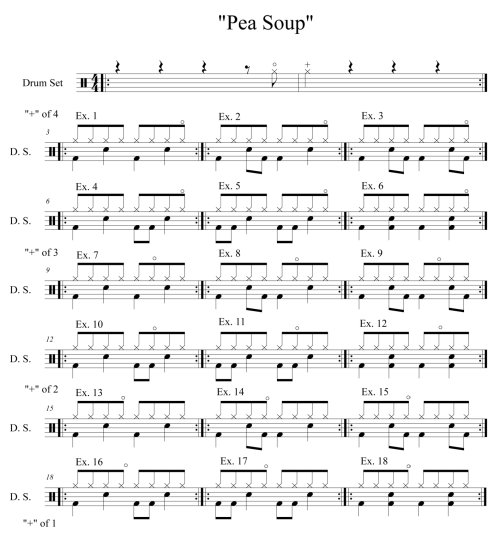 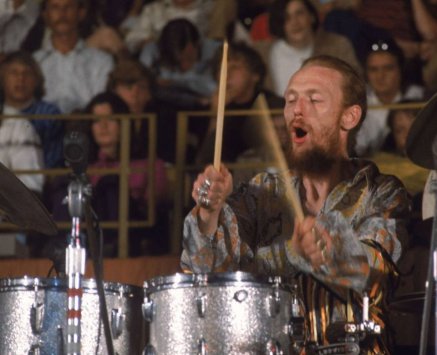 When you look back at the most influential drummers of the late-sixties and seventies there are three that stand out from the rest. They are John Bonham, Keith Moon and Ginger Baker. The latter was different than the previous two as he had a distinct style that was clearly influenced by jazz. Ginger Baker had a one-of-a-kind approach to drumming that was influenced by the likes of Art Blakey, Max Roach, Elvin Jones and Baby Dodds. Playing with musicality and showmanship mixed with a flamboyant attitude toward the instrument Baker became a drum god during his time with Cream. Although fans would consider him to fit in the rock category Baker himself preferred to be respected as a jazz drummer playing a rock gig. He was considered to be one of the pioneers of double bass drumming as he utilized them starting in 1966. Along with Moon his drum set was larger than what drummers had been using at the time. In his online bio he recalled:

Every drummer that ever played for Duke Ellington played a double bass drum kit. I went to a Duke Ellington concert in 1966 and Sam Woodyard was playing with Duke and he played some incredible tom tom and two bass drum things, some of which I still use today and I just knew I had to get a two bass drum kit. Keith Moon was with me at that concert and we were discussing it and he went straight round to Premier and bought two kits which he stuck together. I had to wait for Ludwig to make a kit up for me, which they did – to my own specifications. So Moonie had the two bass drum kit some months before I did.

In his early days with Cream, he developed what would later become the standard rock drum solo, with the best known example being the five-minute-long epic titled “Toad.” Baker was also one of the first drummers to alternate his left foot between his bass drum pedal and hi-hat pedal to create numerous groupings. This also became a standard. Baker’s setup is unusual in that he positions his drums flat as opposed to on an angle making them more difficult to play. Visit https://www.gingerbaker.com/. 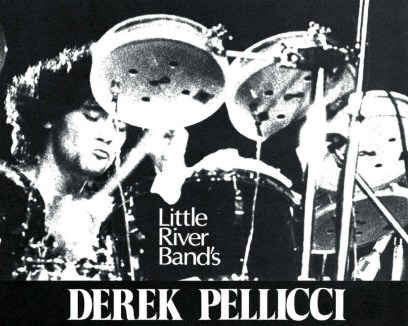 Lately I have been obsessed with watching YouTube videos of The Little River Band. I forgot how great hits like “Lady,” “The Lonesome Loser” and “Reminiscing” are. I’m really impressed with the tasteful drumming of Derek Pellicci. One thing that stood out to me was the electronic drums he mounted on the right side of his kit. According to Modern Drummer:

Pellicci was one of the first people to use Joe Pollard’s Syndrum synthesizer drums. He’s tried other electronic drums, but says, “Nothing felt like a drum. A lot of the drums I tried were solid, hard rubber pads and that’s so diverse to the kit you play. You’re playing on a set of acoustic, combustible drums with an air resonating factor. Then, all of a sudden, you come off those drums and hit a piece of hard, solid rubber. It’s just not natural. That’s why Syndrums were such an innovative thing. You can tune them to the feel of the kit and it doesn’t affect the sound of them. “There’s a way of using Syndrums, a way of adopting them. A guy will play a really fast single stroke roll down them and they break up all over the place. They have a very short delayed signal in them. There’s a real art in getting used to them. The more you lay off them, the better they sound. I use them to fatten things up. I usually like to double my snare with them.”

Joe Pollard was a drummer for the Beach Boys and a studio drummer. He had been seeking someone to build him a set of electronic drums for over ten years. He met Mark Barton who was an engineer at the Tycobrahe Sound company. Joe’s theory was that guitarists had pedals and effects, keyboard players had synthesizers, but drummers were still limited to beating on skins. Mark engineered some working prototypes which were previewed to some prominent drummers. They were received well. Mark and Donald Stone incorporated Pollard Industries and starting selling Syndrums. The company released two models (single drum 177 and four drum 477) but they were a financial failure.

Pollard, Inc. wound up selling its assets to Research Development Systems, Inc. which manufactured the Syndrum CM and a couple of other slightly updated models. There were 3 major types: The Syndrum 1, the Syndrum TwinDrum, and the Syndrum Quad. These were used by many prominent drummers like Terry Bozzio, Vinnie Colaiuta, Jeff Porcaro, Roger Taylor and of course Pellicci. Although the Syndrum was capable of many different sounds, the one that caught on was that descending “dooooooom”. That sound is still sampled by DJs today. There is a Syndrum patch available in almost every synthesizer sold today.