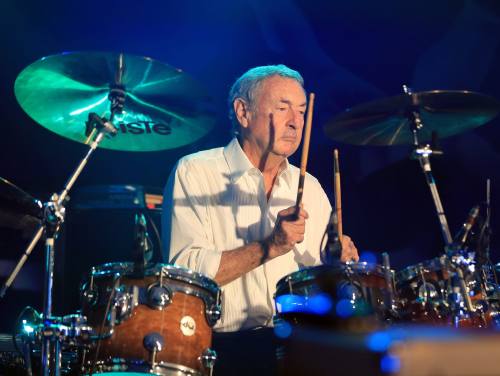 I must first confess that I am late to the party when it comes to Nick Mason. I’ve heard and admired plenty of Pink Floyd songs over the years (including owning the live album A Delicate Sound of Thunder). My dad is a huge Pink Floyd fan, so their music was in my house while growing up. That said, I never fully appreciated the drumming of Nick Mason until recently. Mason is a founding member the progressive rock band, the only member to feature on every Pink Floyd album, and the only constant member since its formation in 1965. Listen to any song off The Wall or Dark Side of the Moon and you’ll hear Mason’s masterful drumming, dynamic at times and delicate at others.

Clearly Mason was influenced by the swing era. His abstract approach to the drums and open tuning is part of his signature. His kits are also an extension of the big band approach as he uses both single and double headed concert toms for that huge sound. Many of his performances sound as though he is sitting in an enormous studio with lots of echo. He also uses percussion, electronic drums and Rototoms as an extension of his sound. Mason used these when soloing within the band’s songs. This includes Nick’s Boogie, A Saucer of Secrets, The Grand Vizier’s Garden Party, Skins, and Time. Due to the more energetic live performances of Pink Floyd, Mason’s style was more complex live, and can be heard on such albums as Ummagumma and Live at Pompeii.

In an article for Financial Times. Mason described his laid-back style: “That’s my natural way of playing. I was never a technical drummer or a student of drumming. I’m a worrier. I’ve always had a low opinion of my drumming skills, I suppose because I don’t have the technical background. I do realize that what I do works and now I am comfortable with it, but I always felt a bit ill at ease about it. I only took up drumming in the first place because someone else had got a guitar and we were forming a band and I was buggered if I was going to be the bass player. That’s the truth. I like the drums, but that was more or less how it panned out.”

I would describe Mason’s style as the gravy that pours over your food. It’s so smooth and compliments everything it touches. It’s easy to overlook what can be considered as “simple” drum parts but there are two factors that remain. 1. It unselfishly compliments the song. And 2. Someone had to ingeniously compose that part to begin with. Mason’s drum parts are exactly what the song calls for. An uneducated ear might call some of them “lazy” while musicians refer to them as “genius.” The Rototom intro to Time for instance is so simple yet brilliant (see below).

Pink Floyd stopped performing together officially in 2008. In 2018 Mason announced his new band, Nick Mason’s Saucerful of Secrets. The band focuses on performing tracks from Pink Floyd’s emergent years of 1967-1972. Drumming has taken Mason far beyond his bands. He was appointed a Commander of the Order of the British Empire in the 2019 New Year Honours, “for services to music” and was presented with the award by Prince William, Duke of Cambridge at Buckingham Palace on May 2, 2019. 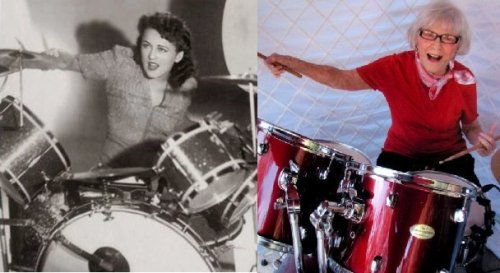 Viola Smith passed away peacefully in her sleep last night, October 21st. She would have been 108 on November 29.

Starting out in her family’s Smith Sisters Orchestra and later playing in the all-star female band The Coquettes, Viola made a name for herself as not only the best female drummer, but one of the best drummers of her time, period. At the age of 106 Viola was still actively drumming in a band called the Forever Young Band. Viola’s extraordinarily long career has spanned the entire length of modern music from swing, to jazz, to rock n’ roll.

During World War 2 Viola wrote a controversial article in Down Beat magazine titled, “Give Girl Musicians a Break!” Always being an activist for women musicians Viola challenged bands to replace their missing musicians who went off to war with females. She argued, “In these times of national emergency, many of the star instrumentalists of the big name bands are being drafted. Instead of replacing them with what may be mediocre talent, why not let some of the great girl musicians of the country take their place?” The article initiated a nationwide discussion about the role of women in the music industry and the prejudice that they faced at the time. Viola continued to campaign for women musicians throughout her career. Her tenacity was an inspiration to many women who stood up for themselves.

Viola commented on the dilemma that faced females, “Girl musicians used to have trouble getting any work at all. You had to prove yourself. You had to be heard, but how could you be heard if nobody gives you a chance to be heard? This was the situation for years and years. I always had a job, like the Coquettes, which was an offshoot of the family orchestra. We had some very important dates for the band in big theatres around the country. But this all happened naturally because I came from the family orchestra. The work was just laid out for me. I didn’t fight for it. But all the girl musicians outside of that had a problem, a real problem.”

Pictures and Videos of Viola

John Bonham was legendary for having one of the quickest right feet in all of rock. His rapid triplets still challenge drummers today when learning Led Zeppelin cover songs. Many less capable drummers cheat with double bass pedals. Bonham accomplished his downbeats with the Ludwig Speed King pedal.

According to Bonham’s Wiki Page: At times, Bonham’s kick drum pedal squeaked. Jimmy Page later commented: “The only real problem I can remember encountering was when we were putting the first boxed set together. There was an awfully squeaky bass drum pedal on “Since I’ve Been Loving You”. It sounds louder and louder every time I hear it! [laughs]. That was something that was obviously sadly overlooked at the time.”

Unlike some contemporary drummers, Bonham did not use a double bass drum kit. He did once own one, a Ludwig Thermo Gloss Natural Maple Kit featured in the demo “Communication Breakdown,” but it was removed from his kit by the rest of the band. Bonham did play them while the band was touring with Vanilla Fudge. The band’s drummer, Carmine Appice, introduced Bonham to Ludwig drums, which he then used for the rest of his life.