This week I officially became a “Ludwig man” after getting the Questlove Breakbeats kit. In the past I’ve owned Pearl and PDP kits and this one is a standout. The drums look and sound amazing and I couldn’t be happier with this second kit. The setup is as follows: 7×10 rack tom, 13×13 floor tom, 14×16 kick, and 5×14 snare. The shells are black sparkle, 7-ply hardwood, and have a 45 degree angle bearing edge. The kit comes with stock pinstripe heads and a full set of velvet bags which can be used for storage or as a dampening system.

According to the promo, Questlove wanted to design a versatile kit that could travel easily in between gigs. According to him, “I wanted to build a device that was apartment friendly and compact for the street musician; but also something that was quality sounding. A gritty, raw, ‘breakable’ kit for gigging in clubs that you can fit into a cab. Breakbeats does it all.”

Although it immediately lends itself to hip-hop, this kit is not a one-trick-pony and it fits other genres as well. Positioned on a riser for optimum reach, the kick has a booming sound right out of the box. The toms are equally powerful with a great tone and the snare really pops. For less than $400 you cannot beat this deal. Stay tuned for some new videos featuring my new kit. BTW: Questlove is fast becoming one of my favorites.

[Here’s a video by the man himself: https://www.youtube.com/watch?v=44GYiw1VsKc] 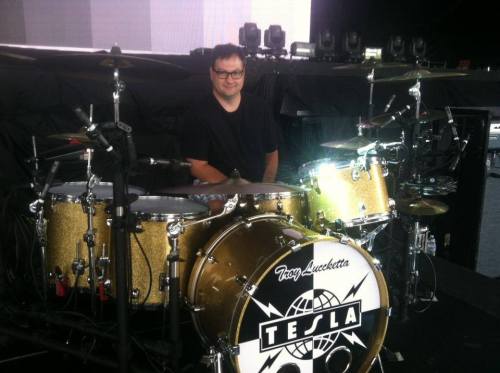 This past week I had the pleasure of hanging out with my friend TESLA drummer Troy Luccketta. Troy was a huge influence on me growing up and I am still amazed that I can call him friend. We had dinner and then hung out backstage where Troy’s band opened up for Def Leppard. It was an amazing show. Troy’s TAMA kit for this tour features all Bubinga shells and it sounds amazing. I had the pleasure of writing a cover story on Troy for DRUMHEAD magazine a couple years ago. I hope it’s not the last. Read Here: http://www.pinstripepress.net/Troy_Luccketta_DH.pdf

Today’s post features a new installment I call “The Gigging Drummer.” In it I will introduce you to journeyman drummers who are making a name for themselves on the scene. Our first interviewee is Mike “Woody” Emerson who has been playing drums for 20 years. He and I grew up together and jammed with some of the same musicians. Today he is the drummer behind Color of Fate.

MA: Can you give us some background on yourself?

ME: I started out in Pittsburgh, PA on the metal scene and moved to Knoxville, TN in 2004 where I changed it up a bit. From 2004-2009 I was in an alternative rock band called Vinyl Season. That project went very well. We had two radio stations playing our original music on the air, as well as one in Chattanooga, TN. We also cut two CD’s and were voted “Best local band in the area.” We entered and won several Battle of the Bands competitions. Everything was going great up until we cut our second CD. A founding and vital member of the band decided to drop out due to issues with another member. Since that member had joint copyright control over the music I, along with my bassist (Christian Johnson), decided to form a completely new band with a different sound. That project started in 2009 and has continued to the present.

Color of Fate was formed with more of a progressive rock sound. It was challenging at first as I had to learn to play odd time signatures in order to keep up with our new guitarist (Marek Rosinski) who is a trained jazz fusion guitarist. This motivated me to improve my chops. We began playing gigs and even cut a demo before another band member left. At this point we had future shows booked under contract and took on a hired gun (JR Lowe) who I had known for years in the band circuit to step up and fill in. At this point we changed our focus yet again and became a headlining entertainment band. Instead of playing one hour with three other bands we were now playing 3-4 hour shows for more money.

MA: What challenges did you experience in regards to booking gigs?

ME: Booking gigs became easy. We refrained from playing our original music and learned a ton of covers, everything from Tool, to the Doors, to the Commodores. We auditioned for a local brewery/restaurant chain called Smoky Mountain Brewery and landed a contract to play several shows at their various locations. They loved us. Since the original contract they have rebooked us again this year, upped the pay, and gave us more gigs.

MA: What challenges do you experience performing live?

ME: The biggest challenge of playing out is getting along with three other musicians. Especially when a lot of our gigs are a weekend long and out of town. Sharing a hotel room means living with these guys on and off stage. Performance wise, I always make sure I can hear everyone else. (Thank you monitors!) If you can’t hear the bass and vocals you are screwed. You will be flying blind through the show. Trust me it has happened a few times. Learning control is also a big factor. If there are slower, softer songs in the set you have to let your wrists do the work and not your whole arm. Save your energy. Maintaining speed and tempo requires me to communicate with my bass player. If I’m playing a song too fast or too slow he will nod accordingly. He nods up if I’m playing too fast and down if I’m playing too slow. This has worked well and the crowd doesn’t know the difference. They just think he’s saying ‘what’s up,’ or his neck hurts. Ha!

Playing out affects my performance in several ways. We usually play three 45 minute sets usually back-to-back Friday and Saturday nights. Friday nights are rough for me. After working a 40+ hour week. I’m loading up my drums, driving an hour or more out of town, checking into a hotel, then loading in to the gig. At this point you have been going for 13 hours already and haven’t even played yet. You start the show a bit rusty. The next night I play a lot better after some rest. I’m on top of my game. Either way, I feel that I am a showman so I still try to deliver to the best of my ability no matter how tired I am. Sometimes you have to adjust your set list to the crowd to maximize their interest and enjoyment.

MA: Do you have any advice for drummers who are looking to play out?

ME: Advice to my drummer peeps:

1) If you have a ‘sound man’ listen well as he is your best friend for the night. He can make your drums sound ‘lost in the mix’ if you are not following his advice.

2) Do not eat right before a show especially if you are just starting out. You already have your nerves working hard there is no need to get the stomach involved as well. I usually try to eat no less than two hours before a show.

3) Don’t drink while playing. Yes, I admit I do a shot before going on stage and sometimes drink a beer during the final set but honestly anything more than that really will throw you off time and mess up the rest of the band as well. Keep water nearby as you will need it as you play.

4) Most importantly, have FUN even if you only get to play out one time you will never forget the rush of performing in front of a crowd. Remember that everyone in the band has worked hard to get to this moment. The best feeling in the world for me is when a fan comes up to me after a show and tells me how much they loved my performance. It makes me want to work even harder at what I do on stage. I love what I do!